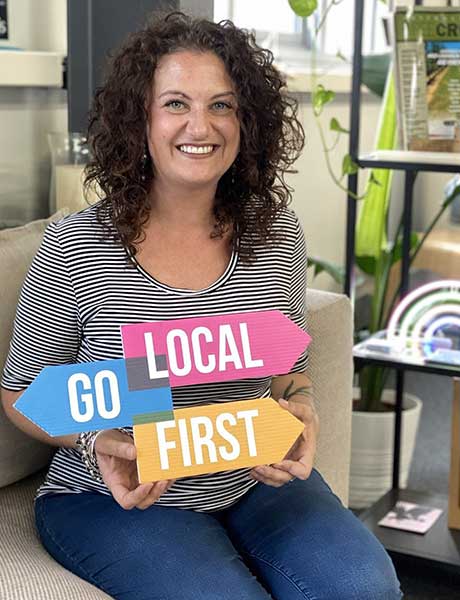 Valentina founded Banter Group back in 2017, to share her many years of marketing expertise with the small businesses in her local community. It was hectic from the get go, the business growing rapidly, employing eight locals within their first few months. They continued to only employ their locals, and ended up winning the Small Business Award for new business back in 2018.

The team at Banter Group have been digital from the get-go, so when they had to transition to remote working it was super easy – although they definitely missed being together in the office.

Showing the resilience of Valentina and her excellent team, while their competitors saw a 66 per cent decline in business, Banter Group grew. Their reputation for delivering brands, logos, websites, and social media strategy meant they were immediately ready to help business pivot during lockdowns, mainly helping them leverage and create digital platforms.

The biggest change for them has been trying to grow their team with two more part time positions. Restrictions are also tough, as they can’t have more than five people in their meeting room. To rectify, they’ve made use of local venues with more capacity to host their larger meetings, putting their successes back into the region that has continued to support them.

Their clients have been really wonderful with accepting any new changes. Their Sydney-based clients were more than willing to travel to Bowral for their meetings, especially given they wanted to escape the CBD! Their more local clients quickly adapted, reaching out to the team back in March to capitalize on government grants while they had some downtime.

Aside from only hiring locals, Banter Group is deeply embedded in their local community. For example, they host a minimum of two work experience placements each year, and they offer paid work for them during school holidays.

Much of their time is donated helping out not-for-profits, including designing the brand and website for the Business Women’s Network Southern Highlands, and designing branding for Friends of Wingecarribee. They’ve also helped out local company WinZero, that is leading the charge for net-zero emissions in the region, with both branding and financial support.

Their support doesn’t stop there, they’re long time supporters of Pop In Locally,  a charity that helps women and children threatened by domestic violence. They’ve created and delivered their social media strategy, and helped them implement it across their digital platforms.

Valentina’s sums up 2020 with one word – “gratitude”. She’s so thankful that their team of eleven employees haven’t had to stand down, and despite not qualifying for a single grant, they’ve retained all their staff and undertaken their own internal mental health training, all while continuing to grow. She says they’re truly like a family, and the care shown from their team members makes her so proud to be a local employer.